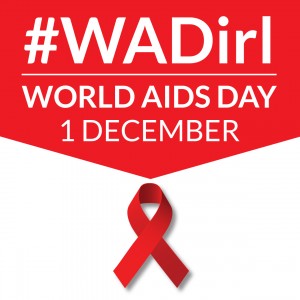 On Friday November 27th the Minister for Health, Leo Varadkar launched the first ever 5-day national World AIDS Day campaign in Ireland. This campaign, developed by NGO’s and statutory bodies across Ireland, in partnership with the HSE Sexual Health & Crisis Pregnancy Programme, is supported by the Mayor of Limerick.

The key messages of HIV Visibility, HIV Stigma, HIV Support and HIV Knowledge are being promoted through a social media campaign on Facebook and twitter asking people to show their solidarity with people who are living with HIV. They can do so by wearing a red ribbon, starting a conversation about HIV with friends and family, challenging HIV stigma and discrimination if they encounter it or learning more about safer sex and getting tested for HIV. The hashtag for the campaign is #WADirl.

While there has been a significant and welcome improvement in treatment for HIV, concern remains regarding the rising numbers of newly diagnosed cases in Ireland. As of mid-November, 427 new diagnoses of HIV have been reported by the HSE’s Health Protection Surveillance Centre (HPSC) [1].

In support of the campaign, Limerick’s Mayor Cllr. Liam Galvin highlighted “the need for people to increase their knowledge of HIV and their own HIV status. A first step in doing so is to learn where to get a HIV test. It is crucial that people know their HIV status if we are to reverse the upward trend of new diagnoses in Ireland”.

The Mayor is joined by the Mayors of Dublin, Cork, and Galway who are also supporting the campaign by promoting the key messages of HIV Visibility, HIV Stigma, HIV Support and HIV Knowledge. Equally, city councils and local authorities are showing their solidarity by lighting up in red, prominent buildings in cities across the country. HIV organisations and sexual health services are supporting the campaign in many ways including organised events and activities that will run throughout the campaign and into December.

Ann Mason, Manager of GOSHH (Gender Orientation Sexual Health HIV) based in Limerick City explained how important it is for people to know their HIV status; “These days HIV is a treatable infection and the sooner someone living with HIV accesses treatment, the sooner the medication will reduce their viral load to undetectable. It is also important to encourage people to openly discuss their HIV Status with their sexual partner.”

Welcoming this new campaign, Lysander Preston, Chairperson of Positive Now, an all-Ireland network of people living with HIV said. “Positive Now stands in solidarity with those living with HIV and AIDS around the world. We will continue to work together to help combat the HIV related stigma and discrimination which greatly impacts on individuals living with this illness. This campaign is a significant and welcome step in raising awareness about HIV in Ireland today’.

GOSHH will be on the streets of Limerick during World AIDS Day, December 1st as the National Campaign Truck will be in the city highlighting the day and the message of Solidarity to the people of Limerick. GOSHH will be providing free rapid HIV Tests on Wednesday December 2nd at its centre on 18 Davis Street, Limerick. No appointment is necessary and results are available in 60 seconds.