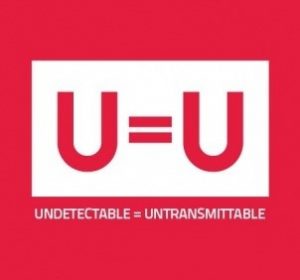 U = U is a short hand way of saying that when someone is Undetectable the HIV is Sexually Untransmittable.

If a person who is living with HIV is taking their HAART medication correctly then the medication will control the virus until there is only a tiny amount of HIV within the body. When this happens the person is known as undetectable. (For more information about HIV medication and how it works click here).

HIV must be present in high quantities at the time of sexual exposure for sexual transmission to occur. Therefore, if someone is undetectable, then HIV cannot transmit sexually. The HIV is untransmittable. (For more information about how HIV transmits click here).

Over the last year, hundreds of HIV organisations, including the US Centre for Disease Control (CDC), have joined a new campaign to endorse the statement that HIV sexual transmission does not occur when viral load is undetectable on ART.

This change is especially important given that prejudice and discrimination against HIV positive people is still widespread.

An undetectable HIV viral load only prevents HIV transmission to sexual partners. Condoms also help prevent HIV transmission as well as other STIs and pregnancy. The choice of HIV prevention method may be different depending upon a person’s sexual practices, circumstances, and relationships. For instance, if someone is having sex with multiple partners or in a non-monogamous relationship, they might consider using condoms to prevent other STIs.

In a presentation to the British HIV Association in November 2017 Mathew Hodson said, “The fear of catching HIV from a sexual partner fuels HIV stigma, which is why it’s so important that the ‘undetectable equals untransmittable’ message is heard and understood”. “Condoms are not required to prevent HIV transmission when viral load is maintained at undetectable levels, although they still play an important role in preventing other STIs.”

Matthew Hodson continued, “Those of us with diagnosed HIV have had to live with the idea that our bodies are dangerous. This has had a profound emotional impact on many people. Many people who live with the virus face not just sexual but also social rejection as a result. In some countries having sex without disclosing HIV status is criminalised, regardless of whether there is a risk of transmission. Ignorance about transmission risk means that people are turned away from services, such as tattooists, or even denied medical treatment. No other sexually transmitted infection carries the same power to strike fear into the hearts of the population”.

“People with HIV are everywhere. We are all nationalities, all races and religions, young and old, gay, bisexual and straight. When we are undetectable we are uninfectious. This means that pretty much all the fear that HIV-negative people have of those of us living with HIV is just wasted energy.”

U = U and Breast Feeding:

There is not yet enough evidence for the same U=U statement to be made about breastfeeding. Studies so far show that the idea of a mother living with HIV, taking HAART and having an undetectable viral load should be able to breast feed without the HIV transmitting to her child, but as yet this cannot be said with surety. Dr Hermione Lyall of St Mary’s Hospital, London states “women should be advised that formula feeding has a zero risk of HIV transmission.”

Advice for mothers living with HIV who wish to breast feed, from the Children’s HIV Association (CHIVA), is plainly written with 3 key things to remember:

U = U and Injecting Drug Use: