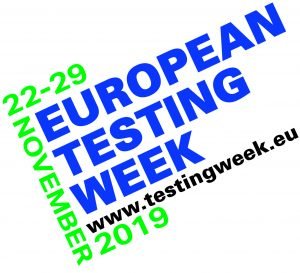 What is European HIV & Hepatitis Testing Week?
Testing Week is an initiative that was launched by the EuroTEST initiative (originally named HIV in Europe) in 2013 to increase testing efforts and create awareness of the benefits of early HIV testing. Now in has expanded to include a spring and winter European Testing Week.

European Testing Week offers partners across Europe the unique opportunity to unite to increase awareness of the benefits of early HIV and hepatitis testing among those who are at risk and promote increased access to testing. In 2018, more than 700 organisations from across 53 countries took part in Testing Week and thousands more people are now aware of their HIV and hepatitis status. Through united efforts, we are creating an even greater success for 2019.

Why is a European HIV-Hepatitis Testing Week needed?
Today, at least 25% of the 2.2 million people living with HIV in Europe are unaware that they are HIV positive. Half of those living with HIV are diagnosed late – which delays access to treatment. It is now proven that when HIV is effectively treated and undetectable in a person, then it is sexually untransmittable. Finding and treating people who are living with HIV is key to controlling the epidemic and testing is the first step of that process.

There is now an effective cure for Hepatitis C. And yet, because Hepatitis C is often asymptomatic and left untreated, chronic hepatitis is a major cause of liver cirrhosis and live cancer. The majority of people with hepatitis C remain undiagnosed and only a small minority in Europe (3.5%) receive treatment. Ireland have signed up to eliminate Hepatitis C by 2030 and community based testing will open the path towards achieving this goal.

These statistics suggest that we need to be doing more to encourage individuals who are unknowingly living with HIV and/ or hepatitis to take a test, and to better target people who have not thought of testing.

What are the benefits of testing…

This year GOSHH are also providing Syphilis tests as part of our rapid testing service. Syphilis can be easily treated if detected in the early stages.

What activities will take place during testing week?

GOSHH will be working with agencies across the Mid-West Region area to provide free testing and awareness in community settings.