Female Condoms do not come in many different shapes and sizes. They are designed to fit the average size of the average vaginal tract.

Female condoms are quality tested and do not tend to be made for novelty purposes but it is always important to check before using them.

Female condoms are produced with lubrication on the inside and the outside of the product. It is recommended to use extra lubrication with them if you are engaging in penetrative sexual activity for more than 15 minutes.

Female condoms must be thrown away after use as they are intended for single use only.

Female condoms and lubrication can be bought from some chemists and on line.

GOSHH supplies female condoms and lubrication for free for anyone who wants them (subject to availability).

The female condom can reduce the risk from the same kinds of sexual activity as the condom. It can be a bit trickier to use to begin with but once you have the hang of it there are some advantages to the female condom:

There are some disadvantages:

Whilst the female condom is one of the most effective ways to protect yourself from HIV transmission, it only does so if used correctly. If you would like to learn how to use a female condom safely please contact us.

Instructions for Female Condom Use

1)      Check the expiry date and that the packaging has not been pierced/damaged.

2)      Decide on a comfortable position to begin with, a female condom can be inserted in many different positions, but many women find it easier standing with one foot on something as the vagina is easier to access.

3) Tear packet open from the top. 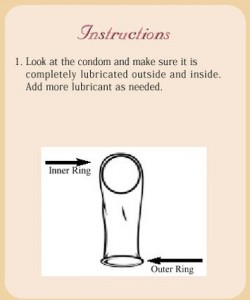 4) Squeeze the sides of the small ring together between your thumb and forefinger or twist into a figure of eight.

5) Find the opening of your vagina and use your fingers to move aside the outer lips (vulva) and any hair that may be in the way.

6) Push the small ring you are squeezing into your vagina as far up as it will go (as you would if you used a tampon). 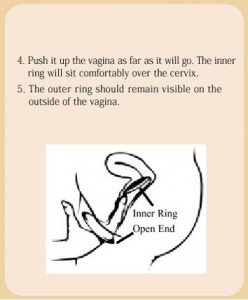 Then put your finger inside the female condom to push the small ring into place. The ring should feel comfortable when correctly in place and this process gets easier with practice.

7) Once inserted, the small inner ring will sit inside you covering the cervix. The outer ring of the female condom should sit about 1 inch away from your body. Once penetrated, the outer ring will push up against your vulva.

The rings on the female condom will stop it from sliding inside you and getting lost during penetration. 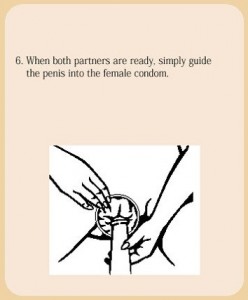 If the outer ring starts to go inside the vagina, or the penis/sex toy is misplaced outside of the female condom you must withdraw.

Re-adjust the outer ring so it is in the correct position and only then try again. 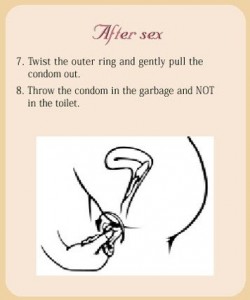 9) To remove, twist the outer ring of the female condom to keep the fluid inside and pull out at the same angle it was inserted (as you would if you used a tampon).

Wrap the female condom in a tissue or the empty packet and throw it into a bin.